Shen Yun Shows Us a Connection to the Divine 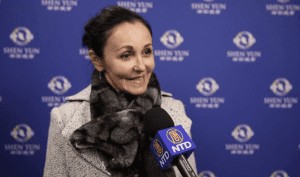 “I was very, very thrilled with the very visual aspect, extremely colorful, it was fantastic, a fireworks display for the eyes!” she said, visibly enchanted to discover New York-based Shen Yun Performing Arts.

As a dance teacher, Micchi could watch the classical Chinese dance with a professional keen eye.

“I really appreciate the aesthetics, the sets, the different group formation, the training! And what was incredible was that at any moment the dancers changed formation without the spectator noticing, so we had a formation and all of a sudden, bang! another one, as if by magic! As if they were floating, it was great,” Micchi said.

“There is the flexibility, the leg’s position, the jumping technique … The jumps were fantastic, it looks like they were on springs and you don’t even hear them fall back. It’s really nice, I loved it,” Micchi said.

Another aspect specific to Shen Yun is the hosts presenting each new scene.

“I found it very educational and very useful to have the hosts come before each scene because it helped us understand the meaning of the story-based dance better, and it was also quite amusing because the hosts had a very good sense of humor. I found the female host exquisite and enjoyed hearing it in two other languages, the English version was great!” Micchi said.

Shen Yun’s spiritual side also caught Corinne Micchi’s attention. She said “we feel a direct connection, which does not go through religion but which is a connection of the individual to the divine … I really felt it and it was well communicated through the stories—we could really feel the presence of the divine in connection with the earth, through the light rays, the smoke etc., there were many visual effects which, I think, were intended to accentuate this relationship to the divine.”

Micchi is aware the dances, the colors, and the hosts are one way to convey information about the culture and storytelling. And it was a contemporary story that really caught her attention.

“I was extremely touched and moved by the message that was conveyed, especially about the oppression that persists in China and of which we Westerners are not necessarily aware of,” Micchi said, referring to a story-based dance which touches on the persecution of Falun Dafa in China. The spiritual practice, which teaches truthfulness, compassion, and tolerance, is practiced freely all over the world, but banned by the communist regime in its country of origin.

“I think I’m going to look at reports, maybe I’ll learn more about how people live in China and the regime and its bad actions. So it was a message of public interest communicated in a very, very strong way. It’s not just a visual show that makes you happy, which it does, but beyond that, it’s the message it conveys and transmits to us who don’t know!” Micchi said.

“So, thank you to all of them for touring around the world, it’s very, very important what they do, we have to keep going. Humanity must be aware of what is still happening today, because it is true. We were aware there were such things that happened before, but we were not aware that it was still happening today,” she said.

With reporting by NTD Television.

Shen Yun ‘Uplifts You Into Something More Divine,’ President of Lobby Firm Says

This website uses cookies to improve your experience while you navigate through the website. Out of these, the cookies that are categorized as necessary are stored on your browser as they are essential for the working of basic functionalities of the website. We also use third-party cookies that help us analyze and understand how you use this website. These cookies will be stored in your browser only with your consent. You also have the option to opt-out of these cookies. But opting out of some of these cookies may affect your browsing experience.
Necessary Always Enabled

Any cookies that may not be particularly necessary for the website to function and is used specifically to collect user personal data via analytics, ads, other embedded contents are termed as non-necessary cookies. It is mandatory to procure user consent prior to running these cookies on your website.